David Kaye’s voice over career began with ‘The Great American Hero’, General Hawk in the DIC animation series, GI Joe in 1989. Working as an on air talent for radio station CKLG (LG73) quickly became less interesting as both on camera and behind the mic roles started taking up more time. Over the next decade and a half David’s on camera burgeoned along with his voice career.

On camera opportunities came in the form of guest roles on various TV series and movies such as ‘Battle Star Galactica’ the X-Files and ‘Murder In My Mind’ with Stacy Keach and Nicole Sheridan, and ‘Dead Mans Gun’ with Michael York.

Also during this time Kaye was being cast in some of the first of hundreds of animation shows and video games. So many, in fact, this now became the main focus of his career and he’s never looked back.

David’s biggest moment was when he was cast as ‘Megatron’ in 1994 in the wonderfully popular series ‘Transformers.’ As a new animation art form was taking off bolstered by Mainframe Entertainment. ‘Beast Wars’ was born (‘Beasties’ in Canada) and would run for four seasons of “…the most fun you could ever have!”, says Kaye. Thus began an almost a twenty year relationship with the ‘Transformers’ franchise. In 2007, David “crossed over” to become the only actor in the history of the franchise to play the lead villain AND the lead hero when he was cast as ‘Optimus Prime’ for Cartoon Network’s ‘Transformers: Animated.”

For Anime fans, David Kaye has been the voice behind ‘Sesshomaru’ in the English dubbed ‘Inuyasha’ series, ‘Treize Khushrenada’ in ‘Mobile Suit Gundam Wing,’ ‘Recoome’ in ‘Dragon Ball Z’ (’96-’98) and as the high strung father, ‘Soun Tendo’ in ‘Ranma 1/2′. His anime work still brings fans to conventions to meet him.

After commuting between Vancouver and Los Angeles for almost 10 years a full time move to LA was inevitable. Shortly after the move, David landed a role in Disney/Pixar’s Oscar winning movie, ‘Up.’

As the work keeps coming in, David’s voice can be heard in Insomniac’s ‘Ratchet & Clank’ video game series as the loveable robot ‘Clank and “Hale’ on’. He’s also been featured in ‘Spider-Man: Shattered Dimensions’ as ‘Mysterio’, ‘Nick Fury’ and ‘Captain America’ in ‘Marvel: Ultimate Alliance 2’, ‘Missing Link’ in ‘Monsters vs Aliens’, the game and many more.

David is now working on another highly popular series ‘Ben 10’ as the lead villain and is a Regular cast member of the follow up to ‘Xaolin Showdown,’ ‘Xiaolin Chronicles’. As well as working with the great JG Quintel on ‘Flap Jack’ and ‘The Regular Show’ Kaye is re-curing on Scooby Doo! Mystery Incorporated.

With on going commitments now for movie trailers, network promo for ABC, Fox, CW and a host of radio and television affiliates and a lot of commercial work, the days get a little tight from time to time. So much so, that he even has a unit that he can use to record from his car. “Don’t worry, I actually have to pull over”, he says.

The projects continue to line up and unfortunately, the days don’t get any longer. David says “You won’t ever hear me complain, though. I’m working with the coolest people on the planet and deeply love what I do… I’ve put a request in for a 28 hour day!” 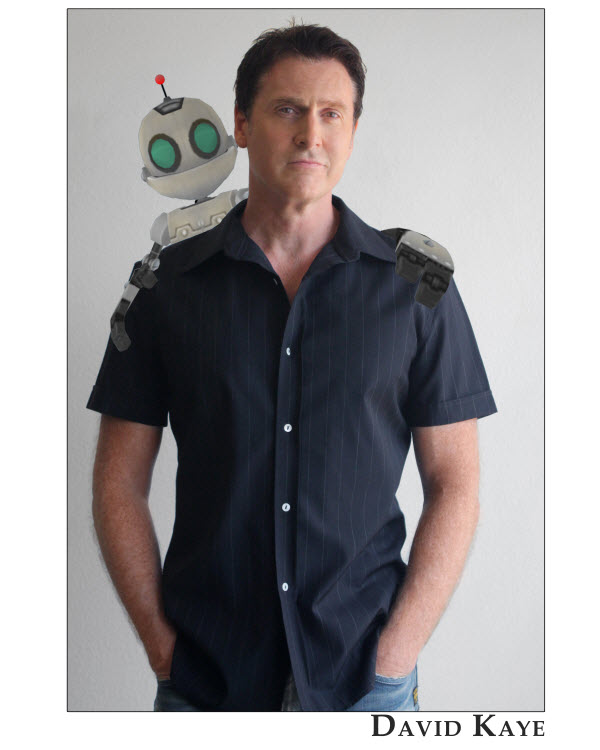